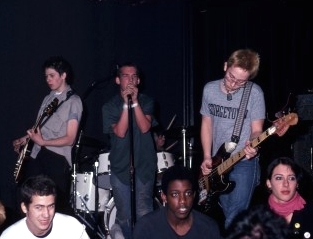 Minor Threat are the group that started a new religion. Abstinence from sex and drugs is a radical statement for a rock band to make, but Minor Threat, or more accurately, Ian MacKaye, did. The idea that you didn't have to get fucked up and stupid, and didn't have to drink and fuck was anathema to punk culture in 1981 (and for the most part, still is), but the philosophy did catch on, and has spread far and wide, much more so than the music of the band that started the whole thing.

Minor Threat, and Ian MacKaye in particular are hot topics to talk about. Unfortunately most people are content to take Ian MacKaye as he is now and paste him into early 80's DC as a mature adult--he wasn't. He seems to have been more mature and articulate than most of his peers, but when reading the first Touch and Go interview, it's easy to see that he was just a kid--I can't imagine an adult boasting about how he hit someone with a hammer because he blew pot smoke at him, and then lambasting people who use drugs or alcohol just so they have an excuse to start fights. Still, Ian, his enthusiasm, and his philosophy of clean living are still going strong today.

And the music still kicks ass.